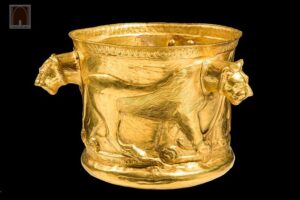 The lion makes repeated appearances in Iranian prehistoric and historic artworks. Here is a nice example from Kelar Dasht, Mazandaran. It is a golden cup, dating to the Late 2nd millennium B.C. (Height 10 cm, Upper diameter 16 cm). It is a straight-sided gold bowl showing prowling lions with their head in the round projecting from the bowl. This golden cup was discovered in 1930s in an Iron Age grave along with other golden objects such as a dagger in Kelar Dasht. It was transferred to Iran Bastan Museum in 1944 and later was displayed in international exhibitions held in Europe.